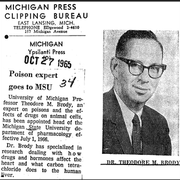 In 1969 the College of Osteopathic Medicine (COM) was established at MSU and the Department assumed academic obligations in the college. Currently, the 29 faculty members have teaching, research and administrative responsibilities to CHM, COM, and CVM, along with teaching and mentoring obligations to graduate students in PhD programs under the BioMolecular Sciences umbrella program, the online Professional Science Masters and Masters of Sciences programs.

A number of national and international Postdoctoral Fellows have worked on research projects with individual faculty members. In addition, the Department is responsible for teaching pharmacology and toxicology to undergraduate students for a variety of programs in at MSU. Consistent with the research interests of many faculty members, the name of the Department was changed to the Department of Pharmacology and Toxicology in 1978. During the same year the Center for Integrative Toxicology (CIT), which is a multidisciplinary academic unit that coordinates research and graduate studies in toxicology, was established where it now resides in the Food Safety and Toxicology Building. Since the department’s founding, three faculty members have served as Directors of CIT; Drs. Hook, Fischer and Kaminski, who is the current director. Several department faculty members also have research laboratories located in the Food Safety and Toxicology Building. 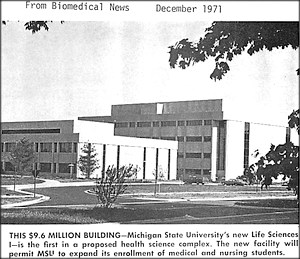 From the inception of the Department, faculty members have been expected to establish research programs and develop a graduate training program.

The department’s first graduate student matriculated in 1967, and through 2012 over 200 PhD degrees have been awarded to students trained in the Department. Many of these graduates currently have prominent positions in academia, government and industry. Stipend support for some of these graduate students has been provided by a variety of Training Grants from the National Institutes of Health (NIH).

Since the Department was founded, research projects of the faculty have been supported continuously by competitive research grants from governmental agencies, private foundations and the drug and chemical industries.

Several faculty members have been awarded prestigious long– term research grant support in the form of highly competitive MERIT and Javits Awards from NIH. Some research projects on environmental toxicology have been supported by a long-running Super Fund from the Federal Government. In addition, a number of faculty members have received prestigious awards, in part, because of excellence of their research.

Current faculty member, Dr. Gregory Fink received the Outstanding Researcher Award from the College of Osteopathic Medicine at Michigan State University, while serving on the editorial board of the American Journal of Physiology. These have included international, national and local university awards (e.g., MSU Distinguished Faculty Awards, Governing Bodies of State Universities of Michigan, etc.) and “named” Lectureships from national and international universities and societies.

Members of the faculty have had a distinguished role in service to their disciplines. Two former faculty members, Drs. Brody and Moore, served as Presidents of American Society for Pharmacology and Experimental Therapeutics (ASPET) and the current Chairperson of the Department, Dr. Rick Neubig, is President, while a former grad student, Dr. Fleckenstein, serves as the President -elect of this most prestigious pharmacology society.

Additional departmental faculty members and former PhD graduates have served as members and / or chairs of Standing Committees, and as Heads of Divisions of the Society. Former chairperson, Dr. JR Haywood is president elect of the Federation of American Societies and Experimental Biology, while Dr. Susan Barman served as the past president of the American Physiological Society.